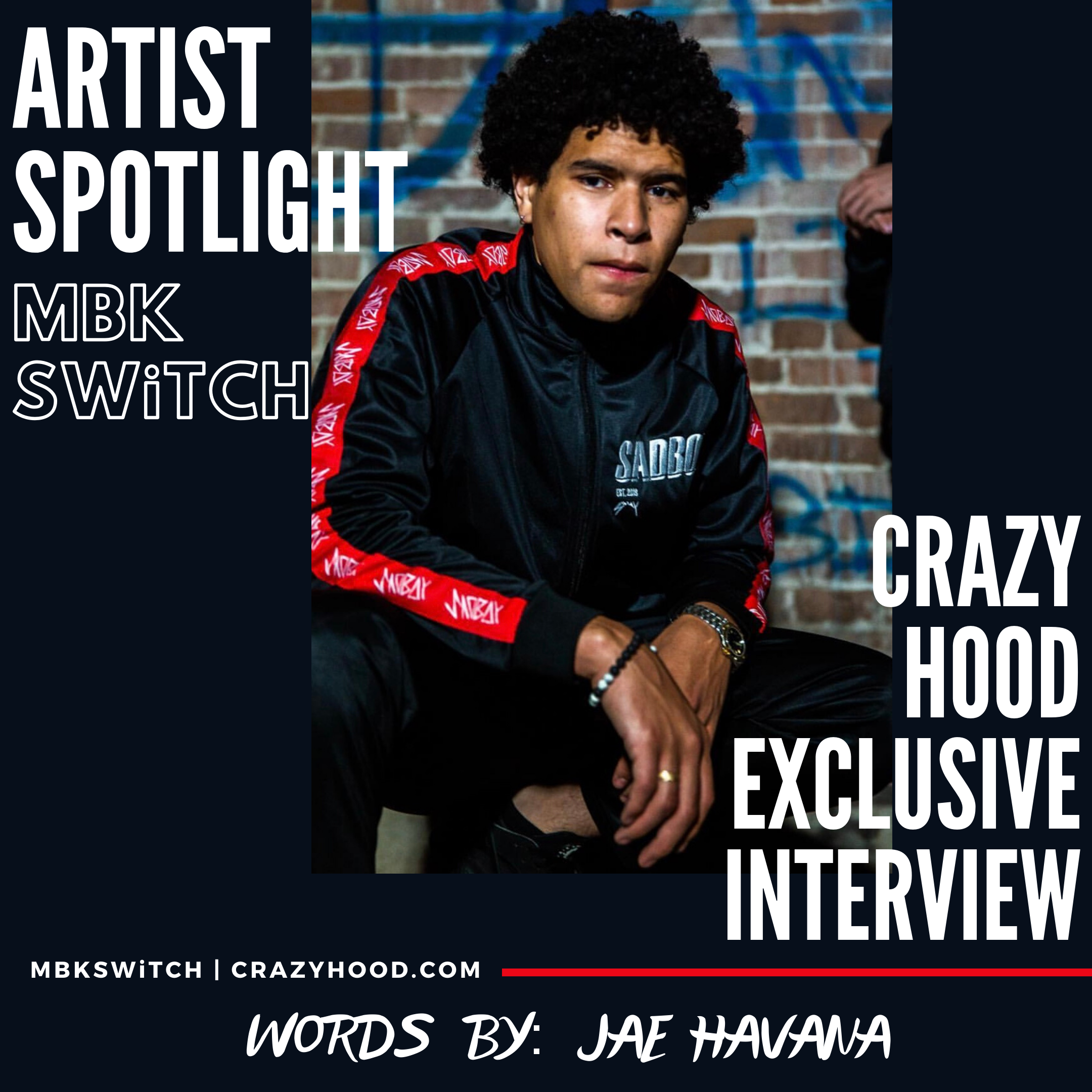 Modesto, CA – To understand the journey of MBKSWiTCH, you must understand where the letters M.B.K. come from and what they stand for. MBK stands for My Brothers Keeper – a way of life that was adopted by his older brother Daniel aka MBKDeezy.

While growing up MBKDeezy was taught by his Father and the OGs that were in M.O.B. (My Other Brother). This brotherhood taught Deezy loyalty & honor. Overtime Deezy created MBK because it was his version of what he was taught; to want the best for your brothers and the friends & cousins you call brothers. To give them what he had & vice versa.

Their Father, Willis Jerome Williams passed away almost a year ago and his untimely death has been difficult for the family. As the family coped with his passing, MBK became that much bigger to SWiTCH and Deezy.

While their Father was alive he helped feed all the families in the neighborhood. Making sure his whole family ate and was well nourished. Deezy continued to do this after his Fathers passing.

“Brothers helped each other’s families, brothers looked out for each other, but even deeper a brother could see your real worth. Not just mob guys, or block boys, but brothers who wouldn’t ask you to ride and end up in prison, who saw your real value and invested in that. In that time we became MBK.” – MBKSWiTCH

MBKDeezy followed by saying “I learned from MOB ways with loyalty and honor, but even the MOB led to destruction. My hope is one day showing many young brothers another way out other than the block. Because I really do feel I am My Brothers Keeper.”

MBKSWiTCH was born in Fairfield, CA and lived in Stockton, Livingston, Newman and eventually landed in Modesto, CA. Although the Central Valley of California is mostly known for its agriculture, it has harvested some of the rawest upcoming artists in California, including SWiTCH.

“I came up with the name SWiTCH when I was 15 years old, it stands for “Samuel Williams is The Coolest Human” it was kind of corny at the time but I kind of grew to like it. At first everyone used to call me Sam but then I started introducing myself as SWiTCH. I made sure the “i” is lowercase because in reality, I think I’m the coolest human and I don’t really care what anyone else thinks” – MBKSWiTCH

SWiTCH first discovered hip-hop at the age of 5. “One day I woke up and my brother had MTV blasting in our room, ever since then I had an ear for Hip-Hop. “ He continues “My Dad would play gospel gangsters in our high top van and once my brother realized how much I loved Hip-Hop he gave me a cassette player with 10 to 15 different Christian Hip-Hop songs on it. I kept it till I was about nine and graduated to an iPod that my brother gave. It was stocked with 200+ instrumentals by 9th Wonder and anything else he could find.”

While doing house chores, MBKDeezy would play instrumentals while SWiTCH and his siblings would freestyle sessions. SWiTCH says “I wasn’t good at all but big bro would always gas me up.” It wasn’t until the age of 10 when he started gaining an interest in the recording process of a song. Walking into his brothers room, SWiTCH seen Deezy and his friend Young Genesis recording on a desktop.

If you haven’t done so, check out The Spotlight Feature on Young Genesis here – > The Soulful Journey of Young Genesis

“They had a headset with a little Mic attached to it and made it work.” SWiTCH continues “I asked my brother if I can hop on a song and luckily my big bro was coo enough to let me get on the track with them. I dipped off to the side and started writing to their song. Ever since then I knew music was for me.”

SWiTCH credits his big brother Deezy for playing such an influential role in his life. “He taught me how to be genuine, to make music to impress people, he’s taught me EVERYTHING I know.” SWiTCH continues “My big bro has shown me how to maneuver correctly when it comes to recording, my delivery, my bars, my background, my roll outs and anything else that has to do with my music.”

How would you describe your style of rapping?

MBKSWiTCH: Personally it feels like I don’t even have a style. Mainly because I make music based off of my emotions. If I feel like turning up, I’ll make a song with some hype. If I feel down I just might make something depressing. It’s all based on how I feel; I try to make sure my music is 100% authentic.

Describe the concept of your song KiCK ROCKS?

MBKSWiTCH: Kick Rocks was recorded in 2017 back when I was on my cocky shiiiii, hahaha. The whole idea of that song was to prove to everyone in my area that I can lyrically murder them if I want to, but I choose not too because I am a man of mercy and grace haha!

Who were some of the first artists (and their songs) that you connected with and why?

MBKSWiTCH: The very first song that I had a strong connection with was “Survival Tactics” by Joey Bada$$ and Capitol STEEZ. It was so crazy how descriptive they were. Being able to vividly create pictures and induce emotions with just words blew my mind. The fact that their bars were that intricate, at such a young age it really inspired me. Not only were they lyricist but also were like political activists in their own way. They were different than the average artist, they spoke about corruption more than they did hoes, clothes and I loved it.

MBKSWiTCH: I’ve realized that a lot of my creativity is based on influence. If I’m trying to achieve a certain goal as in a certain sound, or tell a story, I will surround myself with things of that nature. When trying to get back into my Hip-Hop roots I’ll start listening to some Wu-Tang or maybe some Little Brother. If I want to make a song that sheds light on police brutality I watch some documentaries. We all get to choose what we are influenced by, and there is a difference between being influenced, and just straight up stealing an entire idea. We can’t let everything influence us or else we’ll just begin to lose ourselves.

MBKSWiTCH: “DUMMY” was written to tell all these fuck niggas that  “HARD WORK BEATS TALENT” every single fucking time folk. When I want something I go get it, no questions asked. That’s just the type of breed I am. The song also speaks on holding niggas accountable. Some of these niggas love to flaunt stuff that ain’t there’s, telling stories that their OG told them, but actin like it’s theirs. Calling out niggas that talk shit just to FEEL big. I act upon my code because I AM a Big Dawg. I’m THEE Big Dawg.

MBKSWiTCH: At times it takes me 3 to 5 days to write a song, sometimes weeks. I like to write when I’m feeling it, I never force it. I’ve noticed that writer’s block comes from either over exhaustion or not really being in the mood. Once I finish a song I like to let it sit for a little bit. Then come back to it. When we take something out of the oven it’s always too hot to eat right out of the pan. You have let it cool down so you can enjoy it.

Describe the concept of your EP SWiTCH KiCK.

MBKSWiTCH: About two months before I released SWiTCH kick my father had passed away. A couple weeks after he passed, I began to try and work on my creative process. After trial and error I realized, I legitimately could not write. I don’t know if it was, what was on my mind or because of my father being absent. So I decided to freestyle the entire tape. I wanted nothing but raw emotion and that’s exactly what I gave!!

Name two of your favorite songs on the project and why?

MBKSWiTCH: Definitely has to be Project 8*8*8 and 7UCKED UP **FREESTYLE. They are my favorites mainly because of the emotions that are expressed, at the time of recording; my life was legitimately in shambles. My mind was everywhere, physically getting sick because of stress, so on so forth.

I wanted to express the frustration and anger I was feeling. EVERY time I hear those two songs it takes me back into a place and time. I can FEEL them.

In your song LONG RUN; you really stepped out of your comfort zone and created an entirely different sound for yourself. What inspired the concept of this song and how did you go about writing the lyrics?

MBKSWiTCH: I wrote the chorus to the song in 2017 thinking about my future wife, thinking of the sacrifices we’d have to make. After I wrote it, I kinda just left it in my notes for a while. About 3-4 months later, I’m chillin, drunk with a friend and he bust out a guitar. So we start jamming messing around and then I start singing that chorus. He stops and tells me to pull my phone out, puts Garage Band on and opens a new project. After we drank some more, he began to help me write. At the time I wasn’t in love so I kinda had to reach, love songs aren’t my thing but when it comes down to it I know how to express myself. After we wrote it, we recorded it in his living off of my phone and the rest was history.

If you had the opportunity to work with one artist or group, who would it be & why?

MBKSWiTCH: If I had the ability to work with an artist it would probably be Capital Steez because I feel like we would be able to make an impact on this world that some people are too scared to attempt.

If you had the opportunity to work with one producer, who would it be & why?

MBKSWiTCH: If I had the ability to work with one producer it would definitely be 9th Wonder. He is a doctor at what he does. I grew up listening to his instrumentals & because of him I am in love with Hip-Hop today.

Where do you see yourself in 5 years?

MBKSWiTCH: I see myself in charge of a large nonprofit organization dedicated to helping teens pursue their passion in arts, and reaping the benefits of my labor with not only my family but also my niggas that are close to me. My Father always told me I have the ability to be a successful entrepreneur and I won’t stop till I reach that goal.

What’s next for MBK SWiTCH?

MBKSWiTCH: We got a tape coming out called “BAKI” we got some merch OTW and a few “MBK X Deepsound” shows in the works. I am excited to share everything Deezy and I have been working on with all our people.

How can people reach out to you?

Spotlight is dedicated to shining light on the brightest upcoming artists in the game. From different walks of life these artists are creatively working on their passion to have their voice heard, through their music. If you enjoyed this article please be sure to check out our previous articles below.