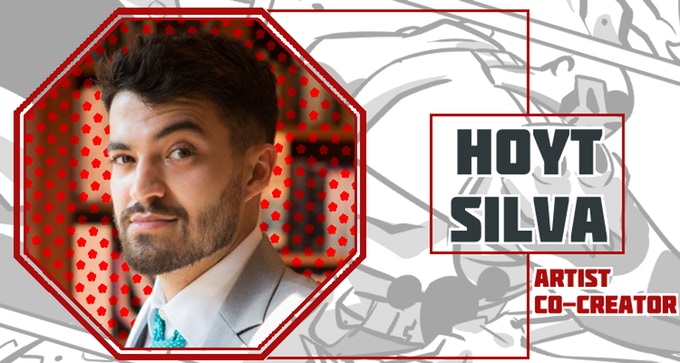 Atlanta, GA – Originally from Queens, NY (and a huge Hip-Hop fan) comics have been a part of Hoyt Silva’s life for as long as he can remember. The Co-Creator behind his new comic Last Stop ; joins us for an exclusive interview with CrazyHood.com

“Some of my earliest memories are asking my Mom for spare change to go to the corner store and buy some comics off of the spinner rack they had in there.” Hoyt says. As a teenager his love for comics helped serve as a form of escapism, when life was tough comics helped him get away from drama that was out of his control. This love for comic books eventually developed into a form of expression and as an adult comics became his preferred method of artistic expression.

“I went to school for Graphic Design but ended up dropping out after meeting my future teacher and mentor Brian Stelfreeze. After attending a convention and getting a portfolio review I ended up moving to Atlanta to learn from Brian and start my career in comics.“ – Hoyt Silva

Throughout the years Hoyt has admired the work of Mike Mignola (Hellboy) and Darwyn Cooke (Parker); “These guys use simplicity to achieve incredible dramatic effect and also crafted stories that elevated the medium in their own ways.” Hoyt says. However his biggest influences have been Rob Haynes (Daredevil: Ninja) and Brian Stelfreeze (Black Panther), stating; “The way they move things from panel to panel and create pages that feel like they’re in constant motion is incredible.”

For those of you familiar with Drink Champs you’ll recognize Hoyt’s name from the Drink Champs Webcomic that he creates for the show. Being an early listener of the podcast and Hoyt came to the realization that what DJ EFN, N.O.R.E. and Hazardis Soundz, were doing; were telling stories and recording history as told by those that had been there. Hoyt says; “Hip Hop has given me so much over the course of my life in terms of guidance and structure along with the inspiration to strive for more than my station allotted me in life, that I couldn’t pass up the opportunity to help record some of that.”

Hoyt continues; “At that time the David Banner episode had dropped. I think it was #16? I listened and decided that I would do a mini-comic in order to illustrate one of the events that Banner had spoken on. I did it, posted it to twitter, and Hazardis Soundz reached out.” And the Drink Champs Webcomic was born.

Hoyt was then invited to attend a live taping of Drink Champs and he flew down to Miami a couple of days later when they were recording the Havoc episode. Since then Drink Champs and Hoyt have been collaborating on the webcomic and to cover homages ever since.

“I’ve been a fan of N.O.R.E. ever since the War Report dropped. I was about 10 years old then and it was inspiring to see people talk about the world around me at that level and make it for themselves. It’s a trip that comics and art got me this far to meet some of my Hip Hop Heroes.” – Hoyt Silva

Comics can take you anywhere, literally out of this world. The comics that left lasting impressions on Hoyt were those that went places that he didn’t think were possible. Comics like Y: The Last Man & Daredevil: Ninja were some he mentioned; “Y: The Last Man was a series that impressed me all the way through. Until then I didn’t realize that comics could be about anything, not just superheroes. Daredevil: Ninja was another great one; Rob Hayne’s pacing and meticulous simplicity was ridiculous.”

“The great thing about comics. Whatever you’re into there’s something out there for you.” – Hoyt Silva

Last Stop is a 200+ page Graphic Novel about the World’s last superhero that must stop a new threat before a terminal disease stops him. Hoyt says; “The inspiration for the story comes from the ending. I’m constantly trying to think of satisfying ways to wrap things up and there’s nothing that I enjoy more in a story than getting to the end of it and walking away full.” Hoyt continues. “This particular ending came from what I believe would’ve been the best ending for most of the superheroes I’ve read growing up. There’s a certain daunting feeling I imagined most of them would encounter after being in that position of hero for so long. So I decided to start the story there; with our world’s last hero.”

Hoyt continues; “After I knew where I wanted to end things and where I wanted to start, I passed a loose outline to the writer of the story; Trey Walker, who worked his magic and came back with a fully scripted version that was far superior to what I could’ve created alone.“

Hoyt & Trey wanted to craft something specific for the web. Already having experience from doing the Drink Champs Webcomic, Hoyt decided to develop a style that was simple and easy to digest. Hoyt says; “I took into consideration that people’s attention spans on the Internet were usually pretty short and I wanted something easy for people to process.” Hoyt continues; “I took Inspiration from Mike Mignola’s Hellboy and Darwyn Cooke’s Parker adaptations and also leaned some into the iconography of popular manga; all to craft something that hopefully flowed well and kept the reader’s interest.”

To gain supports Hoyt and Trey released Last Stop through a website called Webtoon. Hoyt says; “Releasing the comic as a Webtoon first was one of the best parts of this whole process.” Hoyt continues; “A lot of times while you’re creating something like a comic you can’t interact with people about it until it’s done. But, since we posted it weekly, we were able to build up a readership and interact with our fans and readers in a way I haven’t been able to on any other project I’ve worked on thus far.”

In regards to his creative process, Hoyt says “My process changes from project to project a bit in order to adapt myself to whatever story it is I’m telling.” Hoyt continues; “Because our hero’s life is a bit of a mess I decided to keep the style in Last Stop somewhat unfinished. I thought it would further reflect the hero’s mental state while dealing with the burdens he now faced on his final adventure. The color shift was something I thought could be used to move the reader’s emotional state from moment to moment and throughout the epic. Again, my intent was to keep things as simple as I could so that even people who hadn’t read comics before could follow along and enjoy the tale we weaved.”

Having a mentor in Brian Stelfreeze has been important in Hoyt’s creative growth. Working together for almost eight years they’ve helped each other on various projects over that course of time. Hoyt says; “He’s been in our corner from day one. In a way Last Stop is the culmination of various conversations we’ve had that led me down a path of exploring the thought process of putting story first over art.” Hoyt continues; “with Last Stop I explored a style that valued story and design first over the want to make a pretty drawing. When I often think back to the comics that have stuck with me most I don’t think of any individual panel but of the stories as a whole and how they moved me. This is something I strived to replicate with Last Stop.”

When Brian Stelfreeze perceived this to be the core of their tale he couldn’t bring himself to do just a simple pin-up for the graphic novel. He thought instead in order to do what he needed to do with Unstoppable; that he’d need to tell a story himself.

Hoyt says; “It’s crazy because I never thought that I would see anyone else do something like that with our characters. “ Hoyt continues; “I thought I would be the guy who told that story and that would be it. It made it all the more real when a storyteller of Brian’s caliber took it upon himself to play in our sandbox.”

“I can never thank him enough for all the wonderful things he’s taught me over the years and I certainly cannot explain how much it means to both Trey and I that he took things to the level that he did.” – Hoyt Silva

The make Last Stop come alive, Hoyt and Trey decided to create a Kickstarter campaign to help fund the first printing of the 200+ page physical edition of the graphic novel.

Hoyt says; “We’ve completed the whole story and have it formatted into a 200+ page physical edition that we’d love to see brought to life so we and all of our interested readers can actually hold it in our hands.” Hoyt continues; “It includes a lot of extras like a pin-up gallery with art by comic professionals and fans of the series alike. Along with also collecting the Agents of F.I.S.T. strips sprinkled throughout the series and extra art like sketches and character designs.”

“At this point, it’s probably the most read story I’ve done which is crazy to think about. It’s definitely humbling to get love for something that you came up with and there’s a certain charge or energy you get from seeing people go through the motions of a story you created. Ultimately we grew with our characters as we told the story and hopefully our readers get the chance to do the same. “ – Hoyt Silva

In the near future you’ll see Hoyt’s work appear in a project called “00-EX” which is distributed by 12-Gauge Comics. He recently had the opportunity to work with Doug Wagner

I’ve got a few things in the works and have a project I’ve recently finished coming out from 12-Gauge Comics that was written by Doug Wagner (Plastic). Hoyt says; “Doug’s a storyteller that I extremely respect and have been humbled by his patience with me as I’ve worked hard to produce some of the finest art and visual storytelling that I’ve been able to put out ever.“

“Five years from now I see myself still doing what I’m doing now but with a larger library of stories that I’ve told under my belt. Last Stop is just the begging and I think if people stay tuned they’re going to be surprised where we go from here.” – Hoyt Silva