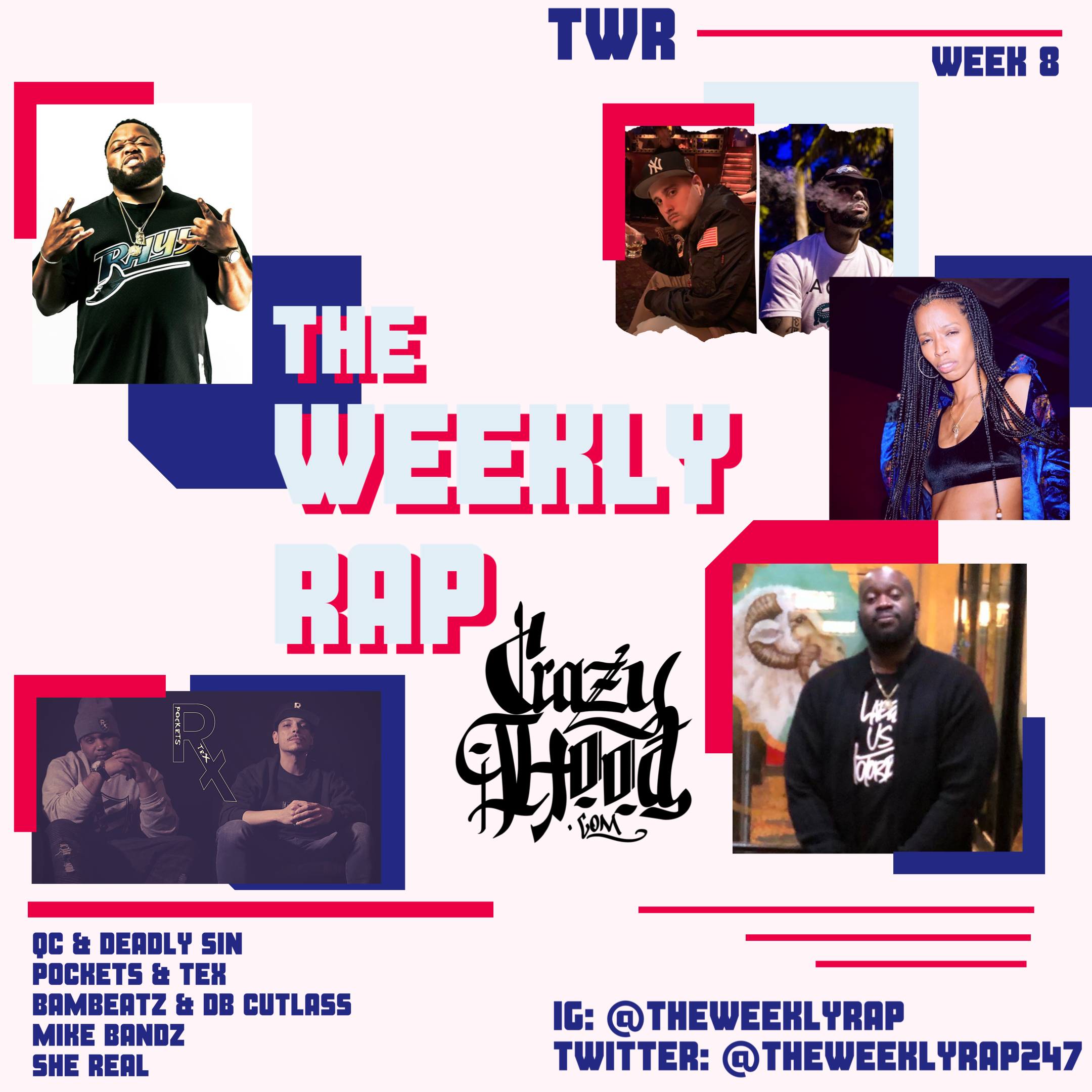 Here at CrazyHood.com in association with Crazy Hood Productions are proud to announce “The Weekly Rap”.  This is a series dedicated to featuring independent artists. Every Monday we’ll feature music from five different artists, one song each. This week we’d like to welcome QC / Deadly Sin, Pockets & Tex, BamBeatz & db Cutlass, Mike Bandz and She Real to The Weekly Rap!

Producer / Beatmaker QC connects with artist Deadly Sin for their song LAST CALL. Two childhood friends by way of Flint, Michigan. The duo create a dope track with LAST CALL to share in these crazy times.

The Brooklyn duo from Gowanus Houses, met in fourth grade, developing a brotherhood that would last the test of time. The two started freestyling together by 7th grade & would begin the metamorphosis into MCs. Destiny would separate them as Pockets would move to Cali in 1995, this allowed the two to develop their craft as solo artists. Fate would reunite the team in NY by 2001 & by 2002 DMI was established. RX represents the harsh realities of poverty, the ups & downs of the streets, the motivation to succeed, & inspire hope in the hopeless. Intellectual, entrepreneurial, & sophisticated, but rawness in its purest form. Students of the game & curators of the culture, Pockets & TeX are the symmetrical balance of showcasing the foundation of NY HipHop, while pushing the boundaries of progression to uncharted territories

BamBeatz is the producer while dB Cutlass is the emcee of the group. They’re both from Miami, FL but BamBeatz lives now in Harlem, NY. They currently created a new album titled, “Shula & Marino” that was released May 15,2020 on all streaming platforms. BamBeatz has produced for KRS-One, Pitbull, coproduced for Fat Joe, Bodega Bamz & Omniscient from Miami. BamBeatz is also an in-house producer for Tan Boys crew in NYC. dB Cutlass has created & also self produced a few previous projects in the past for himself. He also worked with local emcee, Elohim The Anomaly and has a mixtape that’s hosted by Miami own, DJ Killa K. “Shula & Marino” was mixed & mastered at Trackings Studio by Komplex.

Co-Signed by Sway Calloway of “Sway In The Morning” and Funk Flex of “Hot 97” Mike Bandz is among the rising stars across the planet at the moment. Bandz, born in North’s Carolina, picked up his passion towards hip hop from an early stage of his life and it didn’t take long before he made his landmark in the industry. Still growing everyday, his unique charisma keeps placing him a step ahead of others with the ability to make his name stand out strong in an over saturated industry.  Mike Bandz music has been on various radio stations, popular urban blogs and his name continuously shows up on YouTube and Soundcloud just to name a few. Fans can’t stop hitting the download button as of recent his music has hit the million number landmark. In addition, he has also performed along different world class artists. Mike’s passion for music continues to grow everyday and his long term goal is to touch the lives of people through his music. “I do this for my children, my passion and the people,” says Mr. Bandzilla.

She Real – “All Hail The Queen”

She Real is a Harlem, New York native that proves real Hip Hop still exists with every line. She has featured as a winner of Hot 97’s Loaded Lux TopShelf Freestyle, the Joyner Lucas “I’m Kind of A Big Deal Tour”, Sway in the Morning, Jermaine Dupri’s So So Def Female Cypher, headlined a Hip Hop festival in Paris, France and more. Her pen game can rival any of your favorite artists while delivering thought-provoking subject matters over melodic instrumentation.