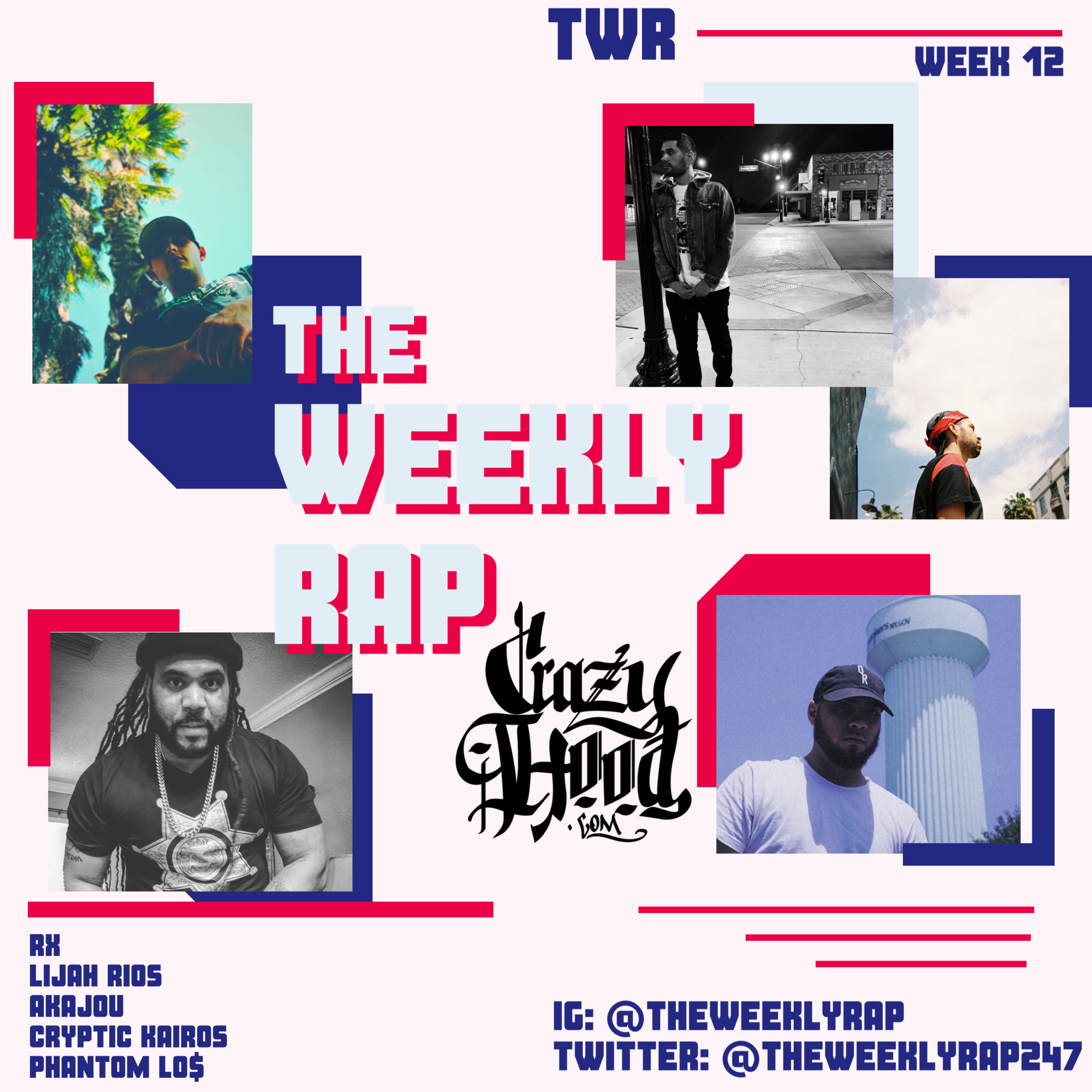 Here at CrazyHood.com in association with Crazy Hood Productions are proud to announce “The Weekly Rap”.  This is a series dedicated to featuring independent artists. Every Monday we’ll feature music from five different artists, one song each. This week we’d like to welcome Rx, Lijah Rios, Akajou, Cryptic Kairos and Phantom Lo$! to The Weekly Rap!

Rx is a Rapper Born in the Bay Area who strives to push for top quality “Hip-Hop” Records. He has also worked with artists such as Crooked I, Spice 1, San Quinn, Twista, and Wrekonize, etc.

Lijah Rios, an independent artist and producer from Westchester, New York. The poster-child for a new and evolving New York boom bap sound. A purely sample driven barsmith who wastes no time getting warmed up. Hard hitting, swinging drums on top of obscure but tasteful samples, accompanied by raps unlikely to disappoint.

Akajou from Los Angeles is back again with a new track, “March 19th” which is inspired by life events since the passing of his father in 2016. “The song is inspirational and motivational – it explains the sunrise on the horizon after so many storms.” – Akajou

On his way to open up a whole new horizon in the music game, is Las Vegas’s natural bred upcoming rapper Cryptic Kairos, with his second single entitled ‘Missing.’ A melodic chorus, provided by singer-songwriter Breana Marin (Fifth Harmony, Phora, Keyshia Cole) and produced byDe-Capo and Droyd (Iggy Azalea, T-Pain, Futuristic), Cryptic Kairos’s new single ‘Missing’ will surely make an impact, representing very well for those who experienced death and in return delivered massive inspiration. With a heavy passion for the art of music, as well as substantial loyalty for his slain older brother, David, Cryptic Kairos will prove determination in his own unique lane of ‘Pop-Rap.’

Born and raised in Miami,Fl, Phantom LO$ has been rapping, writing music, and performing since the age of nine. He fell in love with Hip-Hop at an early age because of his older brother, who was also a rapper. When his brother (20yrs old at the time) was gunned down in a home invasion/robbery, LO$ decided to take his rap career more seriously. “You only get one life, make it count” he states. He has had numerous successful mixtapes, underground albums, and his smash single “I’m On It” which took over the streets of Miami with its trap sound and witty yet aggressive content. Now he’s back with his brand new single “SET IT OFF”, which will for sure captivate both the underground scene and mainstream. Borrowing from the classic 80’s disco hit of the same name, Phantom LO$ delivers knockout punchlines on the beat setting it off on every verse. He even added what he calls “melodic distortion” to the hook to pay homage to the classic record. This new single is available now on all music streaming services and social media outlets. “Set It Off” is significant because it marries the mainstream culture and street culture for two minutes and fifty-two seconds. “I grew up loving the original “Set It Off” record for always being evocative to partying and having fun, and I wanted it to have that same effect now while simultaneously speaking my truth.”