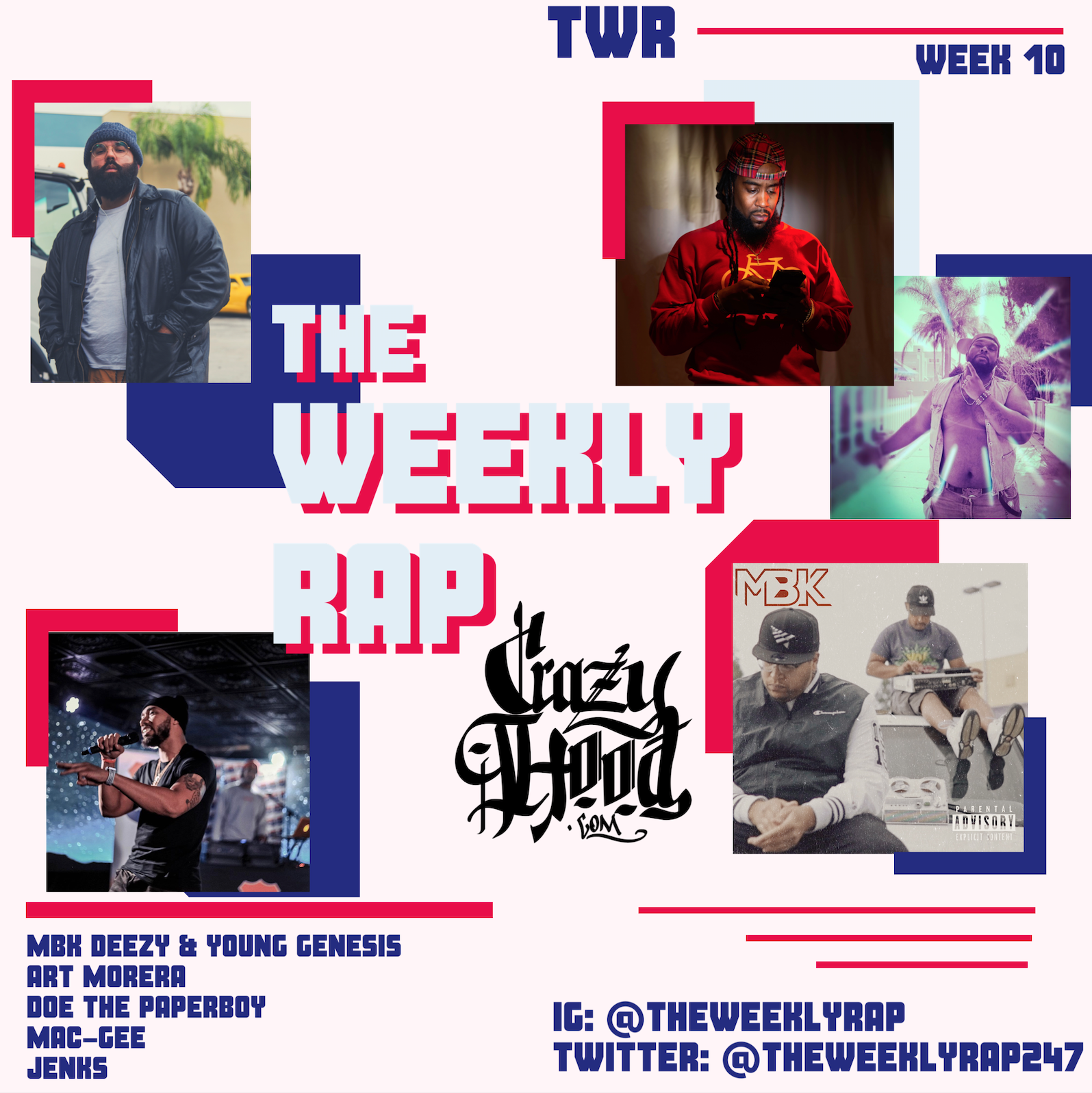 Here at CrazyHood.com in association with Crazy Hood Productions are proud to announce “The Weekly Rap”.  This is a series dedicated to featuring independent artists. Every Monday we’ll feature music from five different artists, one song each. This week we’d like to welcome MBK Deezy & Young Genesis, Art Morera, Doe The Paperboy, Mac-Gee and Jenks! to The Weekly Rap!

MBKDEEZY & YOUNG GENESIS teamed up on what is their response to systemic racism in the US. But Don’t be surprised because if you check their track record, you’ll see, Progression & Change is the very essence of why they do what they do. Young Genesis is a name that implies that the past and the present are constantly intertwined. Young meaning new, and Genesis meaning the beginning or origin. MBKDeezy is the founder of the California rap duo MBK (My Brothers Keeper) whose members include his blood brother MBKSwitch. MBK the mentality of brotherhood through hard life experiences.

“Mad World” is a period piece showing what Art is up to during the current events in the country such as the Coronavirus and the George Floyd riots. “There’s something about being parked at an isolated beach or around some redwoods with no service in my phone.” – Art Morera

Doe The Paperboy – “More Play” (Prod By The Crownz)

Reginald Thurman aka Doe The Paperboy was born and raised in Petersburg, Virginia. Doe is a veteran of the Air Force which he enlisted shortly after graduating high school in his hometown. Since a young age he has always had the passion for fashion and music.  At the age of 8 years old he dived into the art of music after hearing the song “Self Destruction”, on the Stop the Violence Movement album, which inspired him to learn the art.  His family and close friends would encourage him to challenge other teens in rap battles which helped sharpen his skills. Over time, his passion for music went deeper which led him to do talent shows, contests, and create music of his own. Over time Doe has released hit singles, albums, and even collaborated with various artists while staying consistent, self driven, and a curator for creativity. With the evolution of his sound and lyrical content, The latest project titled “2nd Harvest” (released on March 24, 2020) brings veteran lyricism, hard and witty melodies, and thumping drums that makes this his most iconic album to date. Doe has continued to be a pioneer in the music industry for over two decades while expressing himself in the world of fashion and utilizing his creative gift.

Daniel McGee JR better known as Mac-Gee is a Chicago born artist whose style was molded by some of the legends of hip hop and rock music like Biggie Smalls, Lil Wayne, Lenny Kravitz and many more. Born February 2nd 1989 to parents Ruth Ann Haynes and Daniel McGee SR in Chicago Illinois. His father was and is a master of the turntables and a producer so music was always in his blood. Mac-Gee started his musical endeavors at the age of 12. Once in high school Mac-Gee started to record music and take his career choice seriously. Dropping his first project at 16 he continued to grow as an artist, once graduating high school Mac-Gee started to drop more music. As of 2020 Mac-Gee has dropped 10 projects including his debut album Foncé Amour that dropped June 10th 2020.

Hailing from Virginia, Jenks releases the official music video for “Too Hard.” While the track was created before the unlawful murder of George Floyd, the lyrics speak volumes to the current state of the country.